So here is another egregious example of the mistreatment of Shakespeare: a dark, muddy, inarticulate, finely-crafted piece of gloomy emptiness, an abridged version of a great play delivered for a Game of Thrones audience who, if they even entered the cinema in the first place will have left more bewildered than those amongst us who are familiar with the play, which is to say something.

When will film-makers (and wannabe stage directors) at last understand that language is the key to Shakespeare? That the plot is no more than the device, the scaffold, to support the language, to give it a structure within which to unravel? How many times is it necessary to spell it out: plot is not the essence of Shakespeare’s plays; it is, in fact, the least important part? These plays were intended to be acted on a bare stage. By all means, add sets; by all means film it in the north of Scotland at the end of winter, in the twilight hours when there’s still snow on the tops, when a freezing wind is coming in from all directions, when your actors are shuddering with the cold, but for fuck’s sake don’t cut the language to shreds and then mumble the paltry remaining lines in heavy accents in the hope it will provide gravitas. 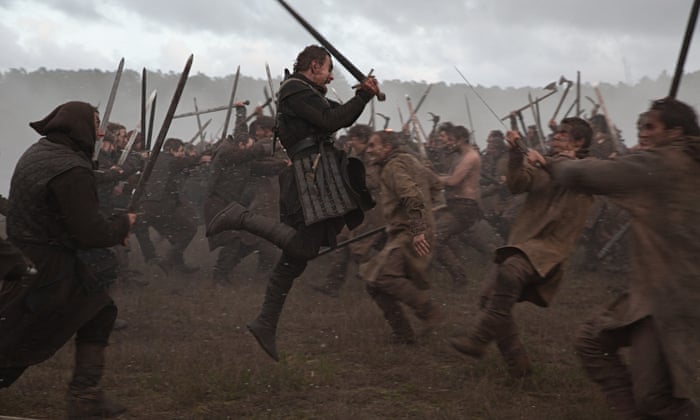 In this version we begin, unusually, with a dead baby, presumed to be that of the Macbeth’s, followed at once by a bloody battle on a moor in the mist which concludes with the witches prophesying to Macbeth that he will become the Thane of Cawdor and later King. A couple of scenes later we find Macbeth and his wife in a village somewhere in the Highlands, preparing for the arrival of the then king, Duncan.

But stop for a moment. This village, extraordinarily, strangely, outlandishly, anachronistically, is constructed of timber in a manner remeniscent of nothing so much as banana sheds in sub-tropical Queensland. Anyone with even the briefest knowledge of Scotland can tell you the people built in stone. For the last five thousand years that we know of they built low houses with three foot thick walls of rock and rubble with thatched roofs. Nobody built thin-skinned timber houses with great cracks between the boards to let in streams of moody light. They didn’t do so because a) they had no timber and b) because if the gap under the door allowed in light it would also allow in wind and the cold.

Does this matter? Am I getting side-tracked here complaining about details? Well, not really, because the film spends much of its time attempting to depict a credible medieval Scotland: no plaid and lots of mud, a harsh and pretty miserable existence made more so in the film by the lack of any means of support: no sign of black cattle, or creels, or lazy beds mulched with seaweed, in fact, the places people have apparently chosen to occupy seem to be the bleakest, most exposed areas of the hills, high up, away from bodies of water, a long way from the sea which was the main source of food… ach, away… enough, stop hoad your whisht… get on wi’ it; after all we’ve got Michael Fassbender playing Macbeth and Marion Cotillard with wonderful soulful deer eyes playing his wife …  That night, Macbeth kills Duncan and blames the murder on Malcolm, Duncan’s son. Macbeth then goes to Inverness to live in a castle as King, as prophesied, but then he kills his best friend Banquo because he’s anxious that the witches also said that Banquo’s sons would sire a line of kings and he doesn’t have a child, which refers back, of course, to the death of the child at the beginning. Next thing he’s going mad, tortured by visions of Banquo’s ghost, so he’s off to see the witches again and they tell him it’s all right because he’ll be king until Burnim wood moves and anyway he can’t be killed by any man born of woman. The next thing he’s a tyrant, killing MacDuff’s family and before you know it Lady Macbeth is dead, she should have died hereafter, or, at least we should have had some explanation of why she died, then Malcolm, Duncan’s son is coming up with the English and, of course, McDuff was born by caesarean so he can kill Macbeth in a long drawn out fight scene on another misty moor.

What we don’t have is any of the reasoning behind this. We have entire acts, soliloquies, sub-plots, excised for no apparent reason, but a number of new scenes added, as well as lots of the aforementioned moody lighting of hills and wooden interiors. We are left without any understanding of Macbeth’s ambition, or that of his wife and how these two weave together, we are left devoid of explanation for his madness, why it should be that these murders should haunt him when we have already been shown him killing so many men in battle. Or, if we do have some of this, it is given both as explication, in other language than Shakespeare’s, and delivered in heavy Scot’s brogue with no consideration for where the microphone’s boom might happen to have been while the person was speaking.

What hubris took hold of the three screenwriters when they made the decision to rewrite this play? What witches concoction persuaded them that they could do it better than the bard? (one has, I note, a credit for the writing of Assassin’s Creed, which is, if memory serves, based on a computer game). But these questions cover an even more significant one: why would you bother? Cut, if you have to; re-fashion language for clarity, if it’s necessary, but to mangle the text in this way is worse than appalling. Fassbender is one of this era’s great actors. Cotillard can be remarkable. Both of them, in this film, do their best to muddle through. Some sense of decency has persuaded the writers to leave in the tomorrow and tomorrow and tomorrow lines and Fassbender manages to deliver them with real force but by that time they are, no matter how marvellous their resonances, no more than words. We have not been given time to care about the man, to find it in ourselves to grieve for him no matter what he’s done (which is, after all, the tragedy at the heart of the thing). Indeed, before we know it we are in a long drawn out death struggle enacted with barely a word between the protagonists. In this director’s version it is the spectacle of the fight that is interesting; the way the swords are wielded, the lunge of the knife that fascinates, not the sorrow at a man being brought down so foully by ambition. The tragedy in this film becomes the fact that it was made at all.

on not hearing a kookaburra

Spectre and the Trauma Theory of Literature

Theme by Anders Noren — Up ↑